Ready to chain down after coming off Rabbit Ears Pass HWY 40 near Steamboat Springs, CO. 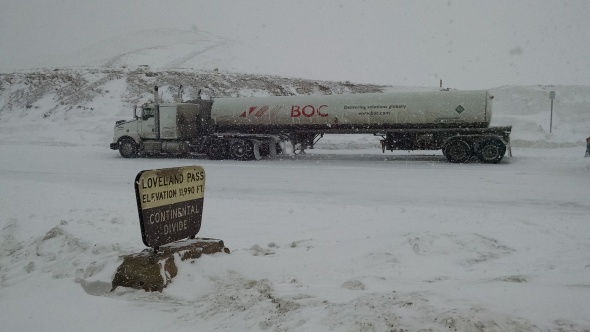 All chained up on Loveland Pass in Colorado.

Loveland Pass before the storm.

One driver and one emergency load — to flooded Boulder, Colo.

Photos and story by Don Christner

What an incredible opportunity and challenge! If you have been listening to or watching the news  in the past week, you know the recent floods in Colorado have been very destructive. People have lost their lives, homes, businesses, roads, and bridges. Hard-hit Boulder, Colo., was in danger of losing its ability to process drinking water, and the water treatment facility needed the product that I carry — the problem was most of the roads were simply gone! Ordinarily, I’d just come up I-25 and go through Boulder.

However, this time the Cummins motor in the 2009 Kenworth pulled up Floyd Hill going west on I-70 out of Denver into the Rocky Mountains, then to Clear Creek Canyon on Highway 6. I then traveled past the casino towns of Black Hawk and Central City, Colo., and up the Peak to Peak highway into Nederland, Colo. Earlier in the day they had called me and the voice on the other end of the phone said the “Colorado DOT won’t give you clearance on Highway 119. The only other road to get here is Sugarloaf Road.It’s a high mountain gravel road, very steep grades and sharp switchbacks. If you don’t want to drive on that road, I’ll understand, but if we don’t get your load, there will not be any drinking water in Boulder. It is an extremely critical load.” Being an old cow hauler who’s seen many challenging roads and situations, I looked forward to the challenge of Sugarloaf Road. After traveling about half a mile down Sugarloaf, red lights from a Sheriff’s Deputy appeared in the mirror. With a dark scowl on his face, he said, “Now just where are you planning on taking this thing?” “City of Boulder,” I said. The scowl drained out of his face, and he said, “Oh, you’re the one they’ve been talking about all day — follow me and I’ll take you up there.”

A City of Boulder pickup appeared and the man connected to the voice on the phone was there looking for me, too. It’s good when they want your load this bad! A utility vehicle joined on, and the four of us, with red flashing lights leading, went on. On ahead they cleared the road and I railed around the corners and drove down the middle of the road.

It was a grand and beautiful drive. I was having a blast, the twists, turns and climbs of Sugarloaf were a pleasure. Cresting a very steep pull,  Boulder and the front range came into view.  There was a lot of floodwater damage along the road, but I pulled into the water treatment plant and delivered the much needed product!  It was a good day and a grand adventure!

By my son Caleb 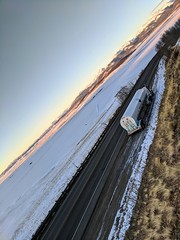 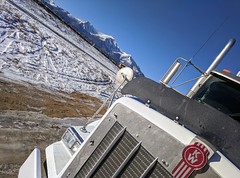 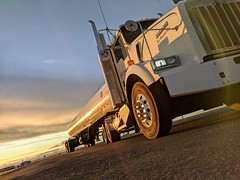